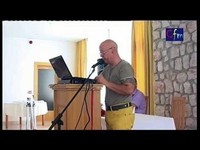 I attended Primary school in Rovinj-Rovigno. After my Secondary school diploma I graduated at the Faculty of Philosophy – University of Zagreb, having attended courses in social studies (philosophy, psychology, and sociology) and Italian language. After graduating I started teaching philosophy. Psychology and sociology at the High School in Rovinj-Rovigno (10th October 1976) and became a Social sciences researcher at the Centre of Historical Research in Rovinj-Rovigno (1st September 1988). I post graduated at the Faculty of Philosophy – University of Zagreb, obtaining the degree of Master of Arts and Philosophy Doctor, in the class of PhD Branko Bosnjak. Since the 30th of November 1993 I have been a Philosophy teacher at University. In 1994 I enrolled for postgraduates studies in Sociology and International Instances at the Faculty of Philosophy of the University of Trieste, Department of Human Science, in cooperation with the Institute of International Sociology in Gorizia, where I took my research doctorate and was appointed PhD (Philosophy Doctor). At the Centre of Historical Research, besides being a researcher, I was one of the cofounders of the scientific research project «Progetto-Project 11», started in Rovinj-Rovigno in 1990. It includes research papers by national and international scientists whose works are published in the scientific magazines for social and culturological questions «Ricerche Sociali-Social Research» and «Etnie-Ethnic Groups», of which I was Chief Editor up to 2009. With my specialized scientific works and articles I actively contribute to scientific debates on a national and international level and I cooperate with national and international institutes. I took part in scientific meetings in Denmark. Italy, Hungary, Slovenia and Croatia. I have regularly attended the international meeting «The Days of Frane Petrić» since its foundation in 1992, and the international meeting «Integrative Bioethics and the New Age», a central segment of the «Lussinian Days of Bioethics». I have also organized some international meetings. During academic years 1992/93, 1993/94, 1994/95 and 1995/96 I held courses on «Philosophy of Education» and «History of Philosophy» as external consultant at the Academy of Pedagogy in Pula, while during the academic year 2005/06 I held the courses «Introduction to Philosophy» and «History of Philosophy» at the Faculty of Philosophy in Pula. Since 2007, I have been working at the Department of Studies in Italian – University «Juraj Dobrila» in Pula as temporary teacher and Head of the Department. I am also holding independent courses of Philosophy and Sociology at the Department of Studies in Italian – Department of humanities, Department of Culture and Tourism.I am also ordinary professor of Philosophy and ordinary professor of Sociology.

Freedom at the Edge of New Media

Utopia as a Society Tailor-Made for Human

The Virtual Dimension of Human Nature

Freedom at the Edge of New Media

The Sociology of Territorial Phenomena and the School of the Future

Dark tourism: the dark side of the travel

The Latin alchemical tradition in the Middle Ages (XII-XIV century): with particular attention to the alchemical treatise of Pietro Bono "Pretiosa Margarita Novella"

Introduction to Sociology of Education

No reform will save us: education and schooling as elements of a new "humanism"

Thaumàzein at the Origin of Philosophy and Music

The Database as a Cultural Form. The Impact of New Media on Artistic Creations: The Relationship with the Cinema

The Database as a Cultural Form. The Impact of New Media on Artistic Creations: The Relationship with the Cinema

Istria and the Renaissance

Ethics of the teaching profession: university syllabus for students of the degree course in Master's studies

Social Sciences and Humanities in the Age of Technology

The Mass Media and the Contemporary Man

Etnos and collective consciousness between identity, diversity and plurality

The scientific-technical apparatus and the "new" man. (Technology and politics)

“WE HAVE TO BE CRIMINALS“. From Socrates to Batman. (The philosophical side of criminal heroism)

Music and the Media, with particular attention to the film

Reflection on Political Freedom in Rousseau

Homer in the Adriatic

Giambattista Vico and "New Science": Vico's philosophy of history as a synthesis of science and metaphysics

Sociology of war. The case of the former Yugoslavia

The Fate of Overman as an Eternal Return to The Self